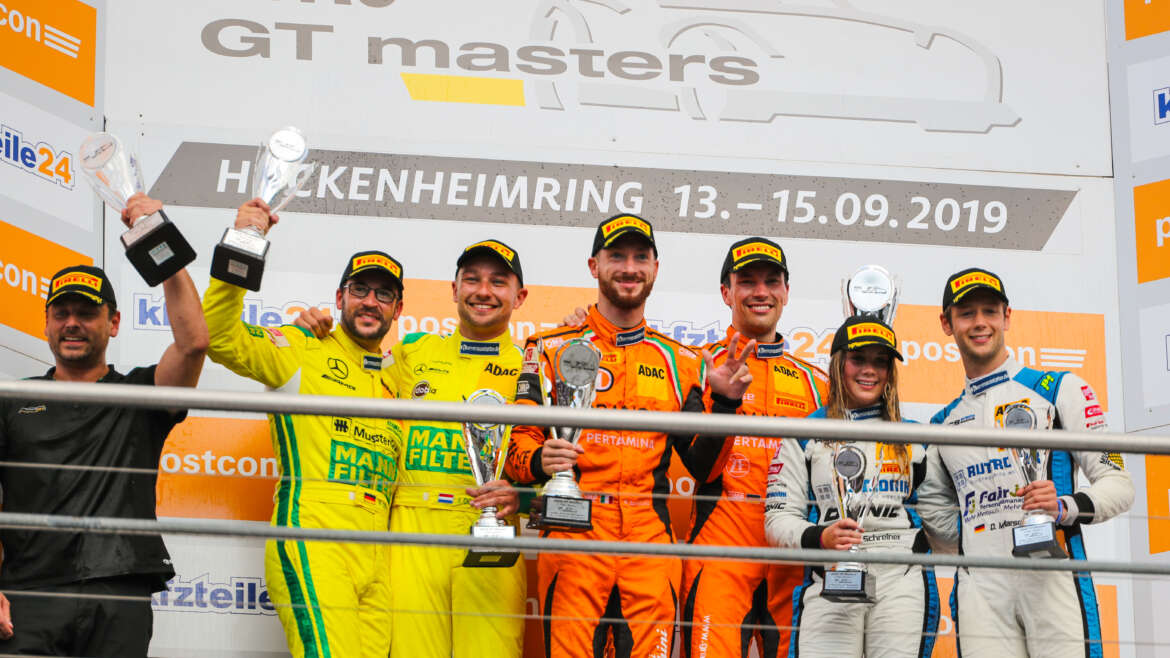 Things are hotting up in the ADAC GT Masters 2019, and Orange1 by GRT Grasser are right at the heart of the action. At the Hockenheimring last weekend, their three Lamborghini Huracán GT3 EVOs came away with another big points haul. Christian Engelhart and Mirko Bortolotti in the number 63 car continued their current successful run with a victory in the first race of the weekend. On Sunday, the number 82 pairing of Rolf Ineichen and Franck Perera secured a further podium, this time for third.

Although Bortolotti and Engelhart have lost out to the HCB-Rutronik Racing duo of Patric Niederhauser and Kelvin van der Linde in the battle for the drivers’ title, which was decided with two races to spare, the team championship remains open. Orange1 by GRT Grasser go into the final weekend (27th – 29th September) of the campaign at the Sachsenring only nine points behind the leaders. The Austrian outfit are therefore still in with a very good chance of winning the highly prestigious team title.

Bortolotti and Engelhart confirmed their reputation as Saturday specialists in the ADAC GT Masters at the Hockenheimring. With his fourth pole position of the season, Bortolotti paved the way for a third consecutive victory in the first race of the weekend. The Lamborghini works driver took the lead in the first stint after an intense battle. After the driver change, Engelhart controlled the race for the win, just as he had at Zandvoort and the Nürburgring.

In the second qualifying session, Engelhart booked tenth place. Because of the 30 kilos of ballast they were carrying, as stipulated by the regulations after their victory the day before, Sunday proved to be rather challenging for the two drivers. In a race that was cut short after an accident on the opening lap, Bortolotti did not have enough time to progress further up the field than eighth in his attempt to make up ground and keep the driver’s title open. Bortolotti and Engelhart head for the Sachsenring in second place in the drivers’ standings and are now intent on defending the runner-up spot there.

Mirko Bortolotti: “For me, the first race was more like 30 minutes of qualifying. At one point, a lapped car played into our hands, and I was able to take the lead. It was yet another perfect Saturday for us after Zandvoort and the Nürburgring. I would like to compliment the whole team. With a better starting position on Sunday, we might have been able to get more out of the race. The car was very good despite the success ballast. But shortly before the end, I came up behind a Mercedes that I was unable to pass. It was not possible to achieve more than we did.”

Christian Engelhart: “Thanks to Mirko laying the groundwork so well, I was very strongly placed at the start of my stint in the first race. I then started to push, and I concentrated on maintaining a steady gap so that our opponents couldn’t get within striking distance. Oil on the track made the last few laps quite interesting. On Sunday, though, we were struggling with the 30 kilos of success ballast on board. But ultimately, it turned out to be a great weekend for us. We won the Saturday race and scored some decent points on Sunday. So to that extent, I am very satisfied with the outcome, and I’m looking forward to the grand finale.”

Works driver Perera and his amateur partner Ineichen in the number 82 Lamborghini Huracán GT3 EVO put in another strong performance at Hockenheim, which culminated in their fourth podium finish of the current campaign. After a P12 finish on Saturday, Perera qualified second for Race 2 on Sunday. The Frenchman remained hot on the heels of the race leader until the driver change, but a hitch at the pit stop cost precious seconds and one position. Fortunately, Ineichen remained unflustered and maintained third place through to the flag.

Rolf Ineichen: “We did a good job all weekend. The car was not easy to drive, but we still managed to get the maximum out of the situation. I had a good race on Sunday but also had to work hard fending off Timo Bernhard. I had to pull out all the stops to make sure he didn’t overtake me. But I’m happy with third place and I’m pleased for the team – they did a great job. The team title is still open, and we will fight for it all the way through to the end.”

Franck Perera: “It was important to have another good weekend here. At the start of the second race, I tried to stay in touch with the Audi. I had a chance to attack, but I didn’t want to risk colliding with him. After that, he was a bit faster, and I was just trying to keep up and nurse the tyres to give Rolf a good basis for his stint. Unfortunately, we had a minor problem during the pit stop, which cost us second place. But Rolf did a great job and salvaged a podium. It was good to be back up there again.”

Team boss Gottfried Grasser: “The bottom line is that we had a good weekend. The win for the number 63 in Saturday’s race was once again a great performance. The guys gave it everything they’d got, and the team also did a great job. In the second race, we had been hoping Mirko and Christian might have achieved more, but eighth place was the maximum in the circumstances. With the 30 kilos of success ballast, they still put in a strong performance. The number 82 car had a great race on Sunday. Franck drove a super first stint. Unfortunately, we messed up at the end of the pit stop. But mistakes happen. It was a bit of a setback because we lost one position. But we can still feel very satisfied with third place. Rolf once again came out on top against Timo Bernhard, who is by no means a pushover. Rolf can really be proud of that. The number 19 was struggling all weekend. They didn’t get the setup right and were unable to get the best out of the situation. I feel that more might have been possible in their case. But with the penalties and a couple of mistakes in the races, they have only themselves to blame. As for Mirko and Christan’s title challenge, we knew it was going to be tight anyway. With the points deficit on the leaders, all the indications were that we would be fighting for the runner-up spot. But that is a realistic prospect for us, as indeed is winning the team championship. Things are looking very good on that front. At the Sachsenring, our focus will be on winning this particular title.” 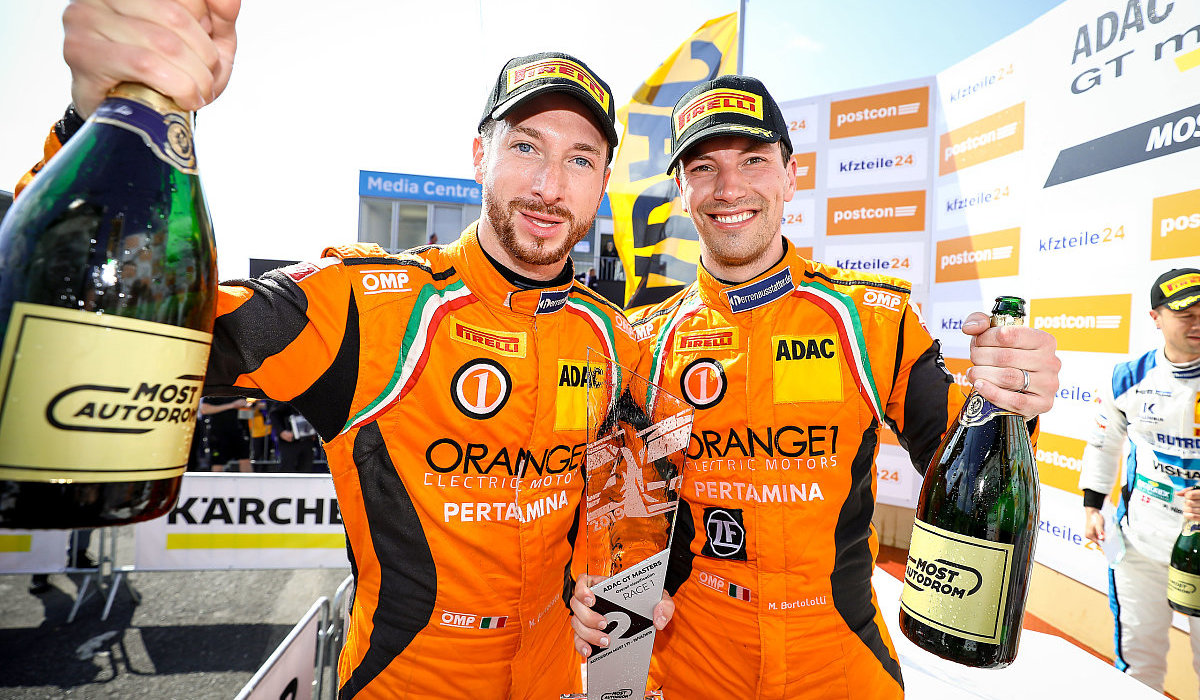 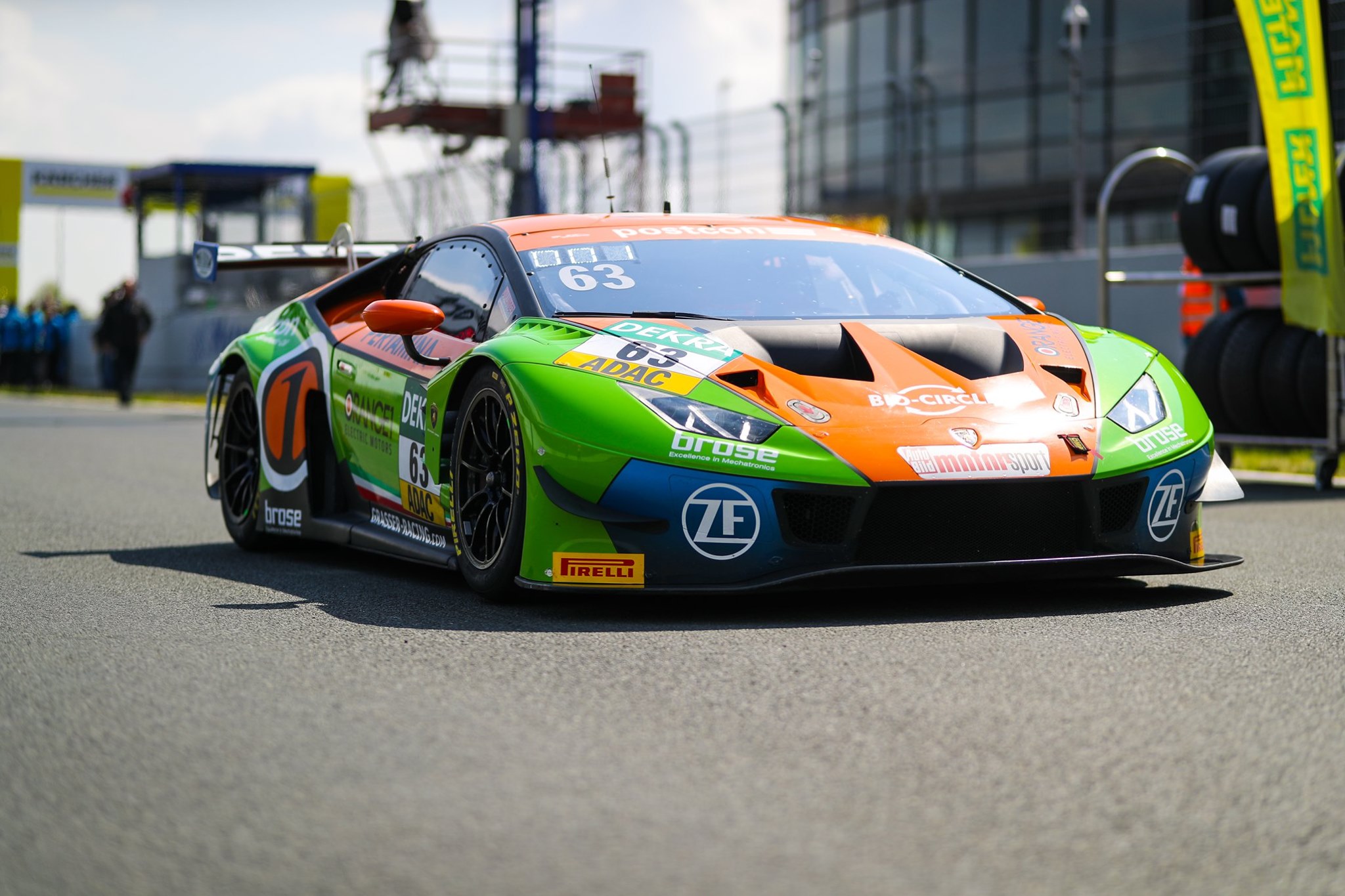